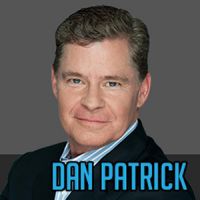 As host of The Dan Patrick Show, legendary multi-platform host Dan Patrick entertains America in morning drive along with his production staff that includes Paul Pabst, Patrick O'Connor, Andrew Perloff and Todd Fritz, known as “The Danettes.” Airing Monday through Friday, The Dan Patrick Show features the most prominent A-list guests from the worlds of sports and entertainment.

Outside the mancave, Patrick signed on as the host of AT&T Audience Network’s long-running sports talk series Undeniable in 2018. Utilizing Patrick’s well-known storytelling and interviewing abilities, the program provides viewers with a unique look into the lives of sports figures. Previously, he was a studio host for NBC's Football Night in America from 2008 - 2017. He has also served as a senior writer for Sports Illustrated, and has hosted NBC’s Olympic coverage in Vancouver (2012), London (2012) and Sochi (2014), and was a correspondent during the 2010 NHL Stanley Cup Playoffs.

Patrick previously worked as a FM DJ, a sports broadcaster in Dayton, Ohio, and at CNN Sports. For 18 years, he helped build ESPN in many roles, most notably, as co-host of SportsCenter. Patrick received a B.A. in broadcasting from the University of Dayton. KPAY SPORTS 1290-AM 6am-9am PT