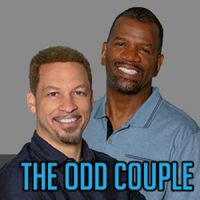 Veteran journalist Rob Parker is co-host of FOX Sports Radio’s The Odd Couple with Chris Broussard & Rob Parker. Broadcasting weekdays, Parker and Broussard provide listeners with dynamic discussion as the two polar opposites take listeners through the biggest hits in sports. In addition to airing on radio stations nationwide, the program can also be heard on FOX Sports Radio’s channel. The duo first partnered in March 2018 to host The Odd Couple on Sundays, and in just six months, was promoted to a weekday timeslot.

CHRIS BROUSSARD
Broussard rose to national prominence as an NBA reporter at The New York Times, where he covered the Knicks and Nets as well as the NBA at-large from 1998 to 2004. Broussard got his start in sports writing at the Cleveland Plain Dealer in 1990, before becoming the Cleveland Cavaliers’ beat writer for the Akron Beacon Journal in 1994.

In addition to his contributions to FOX Sports’ studio shows, Broussard co-hosts a radio show with Rob Parker on FOX Sports Radio. The duo combines credible opinions with unique storytelling to entertain listeners and inform them on all the latest happenings in sports. Broussard also hosts the weekly podcast IN THE ZONE, where he offers his unfiltered opinion on trending topics in the NBA, drawing on his lengthy career in journalism.

Broussard was born in Baton Rouge, La. He played basketball at Oberlin College and graduated with a degree in English in 1990. Broussard also is involved in numerous charitable endeavors, including serving as founder and president of The K.I.N.G. Movement, a national Christian men’s organization.

ROB PARKER
Parker’s career started with a bang. At 22 years old, he was a full-time sports writer at the Daily News in New York. Along the way, Parker was a trailblazer, becoming the first African American sports columnist at the Detroit Free Press (1993) and at Newsday in New York (1995). In 1993, Parker was the first African American beat writer to cover the Cincinnati Reds for The Cincinnati Enquirer. He was also an award-winning sports columnist at The Detroit News for nine years.

In Detroit, Parker had long-running radio show, Sports Night with Parker and The Man. On TV, he worked for WDIV Local 4 for 20 years as an analyst and fill-in anchor. At WXYZ TV, he was the 10pm sports anchor in 2016.

Parker, a New York native, graduated with a degree in journalism from Southern Connecticut State University and went on to receive a Master’s degree in journalism from Columbia University. In 2018, he was named National Association of Black Journalists Sports Journalist of the Year. Based in Los Angeles, Parker is also an adjunct professor at USC. KPAY SPORTS 1290-AM 4pm-7pm PT